NPTEL a joint Initiative of 7 IITs and IISc Bangalore, funded by MHRD, Govt.of India and Supported by NASSCOM is offered at AVCE in the form of online courses to its students. Our students with the guidance of our staff members have featured among the NPTEL toppers on a country wide basis ( Click here for further info ) . 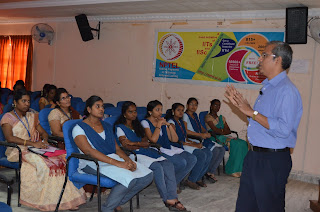 Recognizing the active participation of AVCE in NPTEL, we have been chosen as one of the Local Chapters for NPTEL in Tamilnadu. AVCE with support from IIT-Madras recently organized an NPTEL awareness program in its premises. Faculty members from  Kanyakumari, Tirunelveli and Thoothkudi districts from Tamilnadu and Various districts from Kerala participated in the Program. Prof. Andrew Thangaraj and Prof. Prathab Haridoss, coordinators of NPTEL, IIT Madras and Ms. Bharathi Balaji, Project Officer for the NPTEL, IIT Madras addressed the audience. 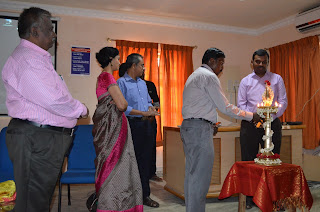 The overview of the NPTEL program was given by Prof. Prathab Haridoss. He also explained the impact created by NPTEL and the association of institutions such as the IITs, IIMs and MIT. Prof. Andrew Thangaraj explained in detail about the NPTEL program, its utility and benefits to both the faculties and students. He brought to our notice regarding the 93 online NPTEL courses available to the students from July 2016. He also illustrated the achievements of the NPTEL program by the manner in which students and faculty have benefited across the globe. Ms. Bharathi Balaji explained about the steps involved in collaboration between an Engineering institution and NPTEL.

Special thanks to Mr. S. Rajeshkumar, Mr. R. Kings Krishna NagarajaSingh and other Team members who has made this event a memorable one.

Posted by Anonymous at 9:26 AM