We are posting this blog with a huge level of confidence and happiness; initially it was a big fear to compete in any event where it requires, that we should communicate only in English, and eventually we will step back from any kind of  program as such. But our college was not ready to spare as such, our management and placement team consistently insisted on competing in events, because even if we fail we lose nothing but if we win it is a great thing. 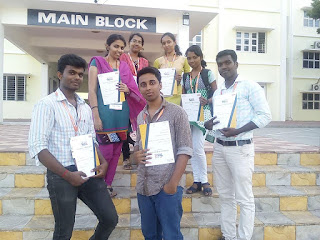 And on the way, we were motivated to register for ICTACT youth Talk 2016. We were hesitant at first but we were ready to compete, 15 of us registered for the program and competed against 2000 participants in the venue.

Though we had fear we are not ready to back down because of the support and Inspiration provided by our college. As per the saying, that self confidence will always yield success we 6 were in the top 100 list for regional Pre-finals beating out more than 2000 participants.


Regional Pre-finals were a big boost for us, and we are now confident enough to compete in any stage. We are thankful to the management of AVCE and placement team who always stands for our betterment.