On 12 October 2021, an awareness programme "One Million Ideas" was conducted on the topic, "A transformational leader, become an entrepreneur - Amazing ideas await you” at our college campus. "One Million Ideas” was originated from the Tamil Nadu government Entrepreneurship Development & Innovation Institute (EDII-TN) through Academic Innovation and Entrepreneurship Development Programme. Er. Dheebin, Founder & MD of Kumari Shopy, was invited to the programme as a resource person. He was a 24-year-old young entrepreneur who founded his e-commerce company Kumari Shoppy during his final semester of studies on February 14th, 2019. 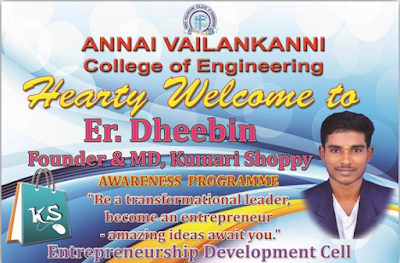 The event began with a silent prayer led by Prof. Lalu Gladson Robin HOD/T&P who also welcomed everyone to the awareness programme. Dr. A. Benham delivered the principal's address, in which he explained the distinction between an entrepreneur and a businessman. Prof. Robert introduced the resource person to the audience. Er. Dheebin expressed his thoughts and inspired the audience with his maiden debut in front of college students, emphasising the idea of "Never Give up”.  Dr. J. Sunil then HOD/ME delivered the vote of thanks and concluded the programme successfully.

Posted by ANNAI VAILANKANNI COLLEGE OF ENGINEERING at 2:21 AM