On 5/10/2021 campus placement drive was conducted at our college premises in the BOSCH training room. Siecon International Chennai, a mechanical core company, held the recruitment drive for their Investment Casting Unit. The drive was only for mechanical engineering graduates from the 2017- 2021 batch. Mr. Kishor Kumar, CEO of Siecon International, came to campus to conduct the interview, and he was treated with the utmost respect, with a welcome poster placed at the front college portico. 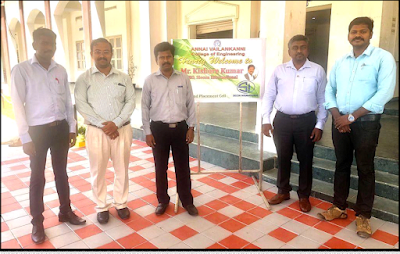 18 graduates were advised to attend a five-day free preliminary training at the college campus. Seven of the eighteen graduates were screened out and invited to the final interview.

The campus drive programme began with a silent prayer led by Prof. Lalu Gladson Robin, who also welcomed everyone to the programme. Principal Dr. A. Benham encouraged everyone before handing over the session to Mr. Kishore Kumar for an interview process briefing. Following, a screening test with multiple choice questions covering the basics of first- and second-year mechanical engineering, as well as a few general questions, was conducted for the candidates. The test lasted 30 minutes, after which Mr. Kishore Kumar began interviewing candidates based on their merit score. Four of the seven candidates were offered a graduate trainee position. However, one of the candidates declined due to his refusal to sign a four-year service bond. As a result, three candidates were chosen and accepted the job offer. 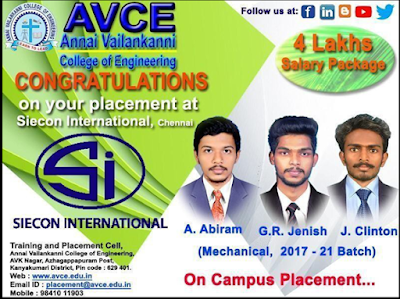 Posted by ANNAI VAILANKANNI COLLEGE OF ENGINEERING at 1:43 AM