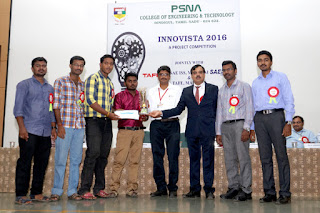 It is always happy to share things that are meant, not as a dream, but as a driving force that converts dreams into reality. In this regard, our project team from AVCE has won the first prize at Innovista 2016 a Technical Extravaganza organized by TAFE and SAE, competing among more than 200 projects from colleges across the state. 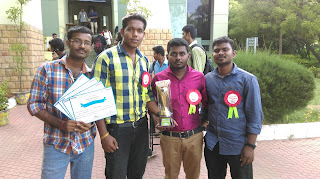 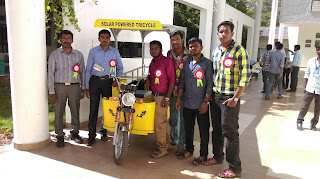 Society of Automotive Engineers (SAE), India is India's leading resource for automobile technology. As an individual member driven society of automobile technology practitioners the ownership of SAEINDIA wrests with its members who are Individuals from the automotive engineering community, which includes Engineers Executives from Industry, Government Officials, Academics and student members. Meanwhile Tractors and Farm Equipment Limited (TAFE), is an Indian tractor major incorporated in 1960 at Chennai, with an annual turnover of INR 93 billion. The third-largest tractor manufacturer in the world and the second largest in India by volumes, TAFE wields about 25% market share of the Indian tractor industry with a sale of over 150,000 tractors (domestic and international) annually and presence in over 85 countries.

SAE and TAFE have  jointly organized Innovista 2016 a Technical Expo to bring out the technical paradigm of young minds in Tamilnadu at PSNA College of Engineering on 17th September, 2016. More than 200 projects have applied for presenting at the grand expo, among which 81 projects have been selected for presentation at PSNA College of Engineering. Two of our student projects namely Solar Tricycle for fish vending women and Auto box Loader Machine featured among the 81 projects.

The solar tricycle for fish vending women works by means of Solar power generated from the Solar Panels present in the vehicle ceiling, for use in  emergency conditions it is also fitted with a re-chargable battery. There is no gear system so that women can easily operate it. It has space for both passengers and cargo. This helps the fisher women to transfer the fishes in an Eco-friendly and cost effective manner.

The Judging panel at TAFE and SAE looked at the Innovation in the project, its importance to society and Eco friendliness. There were other good projects which were there in the competition, but however the solar tricycle excelled in all the criteria the judges used to select the winners, thereby winning the first prize in Innovista 2016.  Representatives from SAE and TAFE and local crowd were blown away by the concept put forth, and appreciated very much the worthiness in the socially relevant project developed by our students. Mr. Tamil Selvan, (EEE) Mr. ManiRaj, (EEE) Ms.Betsi, (EEE) Mr.Ajith Kumar, (EEE) Mr.Maria Priston, (EEE)  Mr.Deepak D.U(MECH) and Mr. Krishna Kumar (MECH) were all behind the development and Concept behind the project. The judges awarded the project members with Mementos, Certificates and cash prizes.

Congratulating the students, AVCE awarded the students with a cash prize of Rs. 20000/- for their efforts.
Posted by AVCE Blogs at 5:40 AM