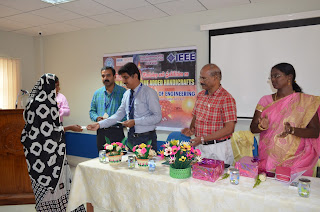 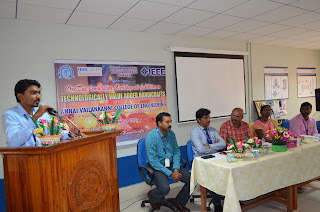 Tamilnadu has rich history of culture and tradition. The handicrafts of Tamilnadu reflect the creativity and skills of Tamil Artisans. It also manifests the grace and beauty of Tamil culture. The various handicrafts of Tamilnadu are created in remote villages and some of these art forms are being diminished. With the noble aims of keeping the rich art forms alive IEEE Student branch and Entrepreneurship Development Cell of Annai Vailankannicollege of Engineering along with IEEE Madras Section SIGHT organised an one day consultation, workshop and exhibition on Technologically Value Added Handicrafts on 6th September 2017. Mr. L. Balu, Assistant Director, Ministry of Textiles, Government of India, was the chief guest for the program.

Mrs. S. Sathiyavalli, District Curator, Government museum of Kanyakumari and Tirunelveli districts was the special guest. The program was convened by Mr. G. Gaswin Kastro, IEEE SB Counsellor and Mr. J. Pearlson David, Entrepreneurship Development Cell Coordinator. The program was organised to create awareness about handicrafts among engineering students and also to bring out value added products by incorporating technology in handi craft products. Doing value addition will attract more buyers and also make the artisans earn more thereby improving their living. The purpose of consultation with artisans was to identify the difficulties they face in making and selling crafts and to find technological solutions for them.

As a part of the program, Artisan IDs recognised by Government of India, were distributed to twenty five budding artisans who recently completed their training under office of the development commissioner (Handicrafts), Ministry ONE DAY CONSULTATION, WORKSHOP AND EXHIBITION ON TECHNOLOGICALLY VALUE ADDED HANDICRAFTS of Textiles, Government of India. The IDs were distributed by Dr. P. SenthilKumar, Principal of Annai Vailankanni college of Engineering. Mr. Balu, AD, Govt. of India talked about the role of handicrafts in rural economy. Followed by this Mrs. S. Sathiyavalli, District Curator, talked about preservation of Tamil tradition and culture and importance of handicrafts.

A consultation was arranged where several artisans knowledgeable in different crafts discussed with the IEEE members of AVCE. Several ways for the value addition of handicrafts were identified in the consultation. Some of the artisans demonstrated crafts using sea shell, coconut shell, palm leaves and other such materials. The artisans also expressed their need of technology in various stages of making craft items. The engineering students of AVCE displayed few handicraft products fitted with LED and audio circuits. During the meeting it was proposed that Annai Vailankanni College of Engineering will act as a consultation centre for creating technologically value added handicrafts. An exhibition was arranged where several handicraft art forms were displayed and kept for sale. Mr. T. Valan Arasu, Vice Principal, AVCE, inaugurated the exhibition. Hundreds of visitors took part in the exhibition.